Why Parents Must Stay on their Children to Brush 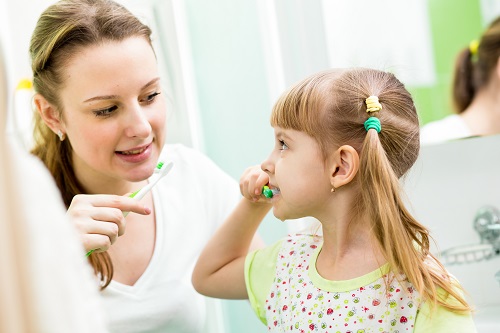 Why Parents Must Stay on their Children to Brush

Posted by Roy Sarmidi with - in Emergency Dentist

While we are happy to perform a great service by taking care of dental emergencies, we would rather not have to take patients on an emergency basis. We would rather see you schedule regular visits to the dentist and not have to go through all of that pain.

Statistics show that the sooner a child develops an ingrained habit of good oral hygiene, the less likely that child is to develop dental problems later in life. While primary teeth do fall out, they act as important “placeholders” for when adult teeth erupt later in life. It is crucial to keep your teeth and gums healthy from childhood through adulthood by taking care of your mouth and making regular visits to the dentist.

In March of this year, officials from the British Dental Health Foundation published an article about how parents do not supervise their children’s brushing efforts for long enough into their childhoods. This article was picked up by Australia’s Bite Magazine and other outlets across the world because everyone at the top level of our profession knows too many children aren’t brushing well enough or often enough.

According to a British Dental Health Foundation poll, one-third of British adults stopped supervising their children’s toothbrushing before they turned seven years old. According to the article, this puts roughly 4 million British children under 14 at risk of developing serious adult tooth and gum problems.

According to the National Health Service (NHS) in England, adults should supervise their children’s toothbrushing until they turn seven years old. They fully believe it takes that long for kids to develop a lifelong habit of brushing the right way and for long enough.

The UK is experiencing a dental health crisis and the NHS believes what they call a “lack of effective supervision” for children when brushing is one of the main causes.

The CEO of the British Dental Health Foundation, Dr Nigel Carter OBE, feels that inadequate brushing is a “fundamental issue” in what he sees as a reduction of the standards of children’s dental health. Dr Carter is concerned because more than 33,000 British children were admitted to hospitals for tooth extractions in the last twelve months.

Dr Carter acknowledges the major effect that sugar has had upon dental health but he feels inadequate supervision is a bigger problem. Dr Carter feels that a child should have to brush thoroughly with fluoride toothpaste twice a day for a minimum of two minutes. They should start as soon as they have even one tooth.

The first teeth begin to appear at six months of age. By the time a child is two years old, he or she should have around twenty teeth. Not only is Dr Carter of the opinion that children should be supervised until age seven, he also thinks they should be monitored from time to time to ensure that they are still brushing correctly and for the right amount of time.

We believe Dr Carter is right on one level but we also believe effective and regular brushing is just one part of the equation for developing and maintaining great dental health. We agree with his recommendations but we also think eliminating sugary drinks and sugary snacks from the diet and making regular trips to the dentist are equally important.

If you teach your children to take care of their teeth now, they can last a lifetime. But telling them a few times isn’t going to do any good. Children have a difficult time when told there will be future ramifications because they haven’t lived long and the future isn’t real to them. Besides, if they haven’t experienced a dental emergency or problem, they don’t know how to relate when you warn them of it.

Any surgical or invasive procedure carries risks. Before proceeding, we encourage you to discuss these matters with an appropriately qualified health practitioner.

Book for your Dental Appointment

IMPORTANT:
If you need an appointment within the next 48 hrs please call our surgery on (08) 9404 9500 to book.
© Copyright. Joondalup City Dental : All rights reserved - Dentist - Joondalup, Perth WA